A Mind Captivated by Space

For many years we had to make do with an EC Televista (Black and White). When we relocated from Hyderabad to Vasco-da-Gama, Goa, the movers overestimated the strength of our TV and loaded a huge crate atop the TV crate. We lived for about six months in Goa, with a broken TV. Colour televisions had been launched a few years ago, but very few could afford them, at that time. My father took a long time, before he finally invested in a colour television. Circa late-1983.

Crown TV – was our first colour TV. [Not very much unlike the one below] 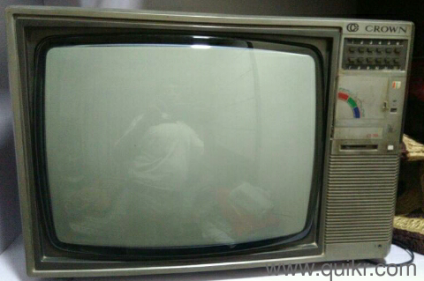 In school, our science teachers were telling us about the INSAT-1B. We prided ourselves on knowing what INSAT stood for, even though we didn’t quite understand how geosynchronous satellites really worked. At that time, it was enough for us to know that we could watch colour television because of the INSAT. All this learning of the space and satellites didn’t have much do with our curriculum. The entire country was excited about the first Indian to go to space. In early and mid 80s, anyone who was everyone, knew almost everything about space and satellites. 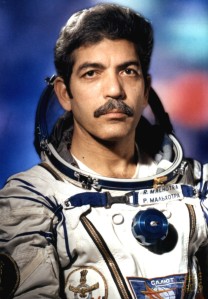 Wing Commander Rakesh Sharma and Air Commodore Ravish Malhotra of the IAF, were the two people the country was watching. I always wanted Ravish Malhotra to be the one to go to space, he definitely looked better, smiled better and had a better personality in my opinion. And of course, he had the most amazing moustache. (These things mattered for a 12-year old). If I remember well, he was even taller. While he never went to space, he will always be my first space hero. Go figure.

Irrespective, both Sharma and Malhotra were our heroes and my friends and I were carving out space helmets using junk material, plastic sheets, cello-tape and writing our names in Russian. (We used to just mirror the letters, for the effect; it looked Russian enough). Remember, the broken EC Televista? That was converted to a Mission Station. The screen was cracked, but we still managed to launch missions. A cardboard pasted with inverted matchbox drawers, stolen from the kitchen and from my father, painted in red and green, were our launch buttons. You could say, there was space fever, all around us.

So it was a GSLV, the INSAT-1B, that allowed us to watch the proceedings of sending the first Indian in space. When asked by the then Prime Minister, how India looked from space, Rakesh Sharma replied, “Saare Jahan se Accha” [“Better than the rest of the world”; is actually the start of a famous patriotic song in India]

It may have been a pre-planned response, but for us at that time, it made a world of a difference. The pride and fervour, that we felt, was unimaginable.

Over the years, my fascination regarding space exploration has declined, but little has hurt my curiosity and excitement. I watch news of space exploration, but am I not as obsessed as I was in 1983-84.

The spacecraft is now in the Earth’s orbit. And as I watch the launch on TV (no doubt because of a spacecraft launched by ISRO), some of that fascination returned and took me back to 1984. That sense of pride has yet again enveloped me and it is an amazing feeling to experience the same feeling so many years later. Thank you, ISRO. While you may not have the luxury of being an international brand like some other space agencies, it should more than enough compensate for, that you make a 41-year old feel like a 12-year old all over again.

You are the real heroes, leaders and inspiration that this country and its youth have always sought. Know that.

3 thoughts on “A Mind Captivated by Space”

This site uses Akismet to reduce spam. Learn how your comment data is processed.

Been there, Done that